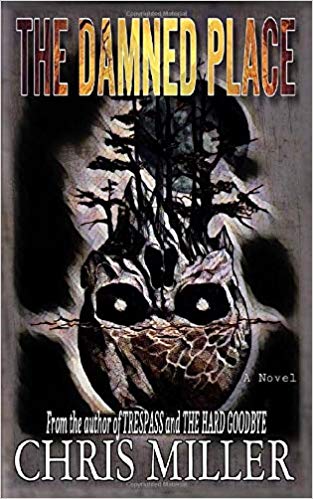 Our wildest horrors and most terrible imaginations are nothing when compared to the evils that prevail in our everyday lives. In the real world, the sickening trend to inflict pain on those weaker than us or to stand idly by to watch these monstrosities occur is now in full force, exemplified even more by the 24-hour news cycles of today. This unabashed depravity is especially true in The Damned Place by Chris Miller, published by Black Bed Sheet Books.

Miller’s third full length novel shares only the most raw and visceral with his previous outing, The Hard Goodbye. Where that novel featured male protagonists–and one female– as they dealt with an evil man out for revenge, leading to many a gruesome end, The Damned Place matches this base setup, but adds a flare of conjoined human and supernatural madness into the mix, while also subtracting the age of each character to that of preteens.

This novel starts with a familiar set up. A band of kids in a small town piss off the wrong people in the process of discovering that the aforementioned town has a deeply disturbing history, growing closer through the chapters as they band together to defeat the evil. The Stephen King influence is undeniable, but what Miller does here is truly astonishing. He may have begun as some sort of R-rated interbred of Stranger Things and early 90’s nostalgia, but this behemoth of a book quickly evolves from that status and into one of the most well-written horror novels I have ever had the pleasure to hold in my hands.

There are actually two major stories in this book. There is the conflict between the main characters and the bullies as well as the story of an empty-bellied beast waiting to be released from another world, residing in the thin atmosphere of the woods.

The story within the story, that of detailing the origins of the eponymous damned place, was my favorite section of the book. Its lore and characterized descriptions, written in both first person POV and third person omniscience provided much leverage to tempting my heart into full on adrenaline-fueled despair, yet I couldn’t look away. I read that full section, which is a hefty chunk of the book, in one agitated sitting. I was actually saddened when this part came to its fitting end. All I know is, we will see more of this “Glutton” character and that is terrifying to imagine what it will do to enter our world.

The main plot about four friends within the twilight of their preteen years has just as much to sink your teeth into for any fan of suspense and horror. Each chapter is written in variable third person limited point of view. This is his way of having his cake and eating it, too. This could have turned out awful, but Miller strived for something greater and I think he did a bang up job implementing these perspectives, although I understand this won’t work for everyone. Miller unwaveringly moves his plot forward with every paragraph, almost to a fault, as there is hardly any time to catch a breath once the bullies come into play. The main villain is Jake Reese, more so than this Glutton monster. If the horror-lit God’s have any real influence on the reading public, they will mark that character as one of the most chilling villains to have ever been written on the page. He is equal parts fledgling serial killer and gross mismanagement of testosterone-fuled hell raiser inclinations. If I didn’t grow up in the early 90’s, I’d think of this kid as a ridiculous, over indulgent fantasy of an amateur horror author. I’ve lived it. I’ve met these monsters among men and they start young. His stooges, Bart and Chris, are either do nothing wannabees or ill-gotten, reward driven, voyeuristic playthings, respectively, in Jake’s own world of gleeful torment.

The main kids are characters that we can all relate to in certain stages of our lives. There was always the girl we all loved and there was always darkness in each of our lives. With the detailed mayhem that Miller swam in for this book, I bit the bottom of my lip on multiple occasions expecting nothing but the worst for these past reflections of myself. I truly began to care for these characters in a way so few horror books accomplish. It is easy to see that Miller knows each of these characters from his own life or through himself. I didn’t want them to die and I don’t think Miller did either, but he’d certainly do what he had to do.

Chris Miller, with The Damned Place, has written a novel that deserves to launch beyond the trappings of indie horror and into the stratosphere beside works like those by Barker, King, Hill, and more. Many years later, we will look back at this novel as a giant leap over the stepping stones so many indie authors like myself wish to climb. I wish him the best of luck in his deserved meteoric rise within Texas horror and beyond.

One thought on “Review of THE DAMNED PLACE by Chris Miller”